How often does it happen that the narrator’s great-uncle died in the same way as your own, sharing the same ideals? My great-uncle was a Sky Soldier (a Kamikaze pilot) too who was a pacifist at heart and was forced to die for his country just like Nao’s great-uncle, Hiroki #1 as she calls him. My great-uncle was a student of German studies and kept a German book  with him until the very end. And like the secret diary Nao discovers, the book which contained his handwritten notes was salvaged later and returned to his sister in the 1970s. I only learnt about this last detail now asking my mother more about him, after reading Ozeki’s Man Booker Prize shortlisted novel “A Tale for the Time Being.” 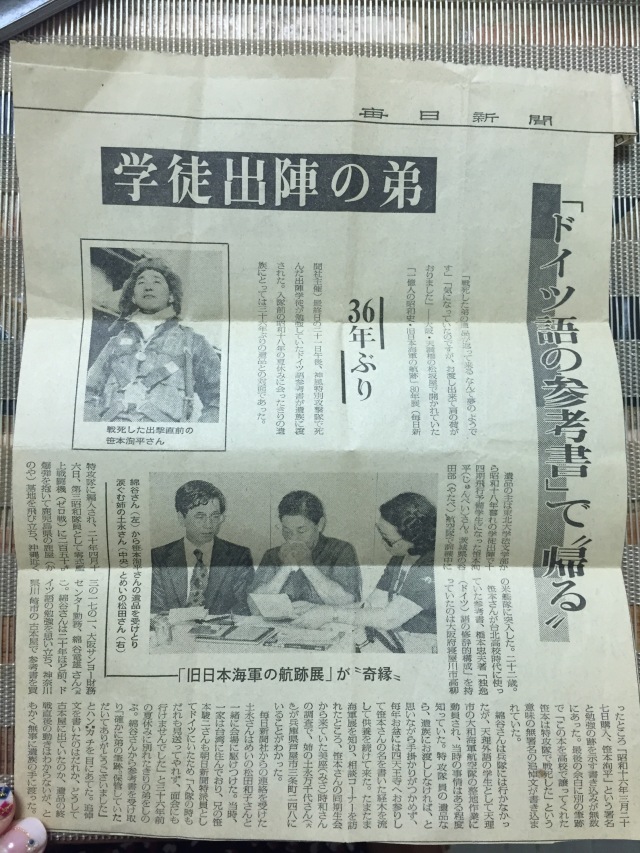 For the past ten years, whenever anyone asked me whether I had a favourite book, I said Goethe’s Faust. That’s because at some point in time when I was perhaps eighteen that might have been true but mostly because I really didn’t have a favourite anymore. I could also never truly identify with a character in a novel nor share their cultural values. This all changed when I read “A Tale for the Time Being.”

Everything Ozeki writes about Japan is so true, so real (no matter how disturbing and unreal it may sound in a Westener’s eyes) and a reflection of contemporary Japan while incorporating the traditional values, all from the viewpoint of a true 帰国子女 (Japanese returnee students). I’ve never been bullied in the way Nao has been, nor did I have any other painful experiences but having lost my father at a young age, I once attempted to integrate into Japanese society as a high school student… And failed miserably. I loved the details, the stories within the stories (like the former soldier who donated money to save whales) and wondered which details were based on the author’s own life and which weren’t but that’s always the secret of a writer. In a way, I wish it would all be true because the world would be a wonderful place if it were so magical.

Summarizing the story, telling you Ruth in British Columbia discovers a lunchbox washed up on the shore that contains the diary of a 16-year-old suicidal girl, Nao Yasutani, living in Tokyo, and gradually gets sucked into her life, does this book no justice at all. Reading precisely this sort of plot summary is what put me off this book in the first place. What this story really does is effortlessly bend time and place, and in the process create a magical world, where everything is somehow connected and anything is possible. The reader becomes the writer, the reality fiction and vice versa.

I’m not religious nor do I believe in many things, but I do believe in some sort of destiny (like the one that brought my pet garden snails, my turtles and my dog into my life) where we’re all connected and can’t help but believe I was meant to read this book. I always had a totally unfounded negative bias towards English-writing Japanese authors and I would have never read this one if it wasn’t for Philip Palmer, who in one workshop on alternative worlds in my MA Creative Writing, couldn’t stop praising this book.

Do you feel like I’ve told you absolutely nothing at this point? Then, there’s only one thing I can tell you now: read this book.

I should apologise for my lack of recent updates… And this update isn’t really an update… But more a notification…
Should any one of you be interested to see some of my more creative side, please check out the new blog I have just started as part of my New Year’s resolution to dedicate more time to creative writing.

I just finished an experimental short story called “The Ken Doll.” For anyone who’s got a few minutes to spare, this is an easily digestible (maybe less so for the men out there) quick tube ride read.

I will of course continue my explorations of London here, so stay tuned!

Expanding on my recently developed passion for creative writing, I had a new London experience yesterday going to Liar’s League, an event partially run by my last creative writing tutor, Katy Darby. No, Liar’s League is not some criminal association, but a themed monthly fiction night where selected short stories are read out by professional actors.

Their motto is “Writers write. Actors read. Audience listens. Everybody wins.” And despite not being much of a performing arts lover myself (usually rather feeling like I just wasted a few hrs of my life knowing I’ll never get them back), I must admit I quite enjoyed this experience (apart from the food served…).

The themes are advertised in advance and writers who are interested send in their unpublished work between 800-2000 words related to the topic at hand by the given deadline to then be judged and chosen by the committee (care to give it a shot?).

There’s an unpublished longlist and shortlist, whereby writers receive some feedback on their work. Finally around 5-7 stories get picked for the night in question.

The event takes place at The Phoenix@37 Cavendish Square, conveniently located just 5 minutes from Oxford Circus. Doors open at 7pm and entry is £5, where you get stamped on your wrist. The evening starts more or less at 7.30pm.

The theme for my night was “Life & Limb” and contained 6 works in total spread over about two hours with a 15 minutes interval in between (with a book quiz and a chance to win one of three books! This time, three short story collections including a Granta edition on travel).

Surprisingly many stories involved falling. Maybe this is the typical risk situation people imagine? But the diversity in which the theme was treated was impressive, starting off with a rather comical punchy story, followed by two emotionally deeper stories of which the second was a very literally artistic piece. In the second half again we had a mix, finishing off with an extremely energetic story funnily treating the theme of sex.

Maybe it’s just my ignorance? But I was utterly surprised at the range of emotions and moods the actors displayed, giving the stories real life just by reading them out. I was initially disappointed, since I somehow thought it would involve actual acting out but really in the end the readings were nothing short of totally engrossing. It was just as much about the writing as the acting.

Anyone would have at least found one story to their liking and would have still found utmost respect for the creativity put on display here in all works by writers and actors alike.

So, unless you’ve got other plans, mark your calendar for the second Tuesday of the month and give it at least once a try!

I’m not sure whether when I initially picked this book, I was aware that the author was a graduate of the Faber Academy, a course similar to the one I’m just about to embark on. Either way, I did find out eventually and it was a partial reason for me to read on. The main character Christine is also a graduate from my university which sort of raised her appeal to me.

Off to a good start with a gripping scene, we are catapulted right into the centre of the story with Christine totally lost in an unfamiliar setting. She suffers from amnesia. Right there, we know what the story is about. Good.

Yet, despite a very good premise and original idea (an attempt at evaluating what reality, truth and trust really mean), I found the final result deeply disappointing.

While the format of having most of the story told through Christine’s journal creates a very specific angle, it also regurgitates a lot of the same material over and over again (this might “set the mood” but at the same time is a danger element of boredom) and is also unrealistic when you come to ask yourself whether you’d be able to actually write that much and that precisely each day, then also have the time to read what you wrote before AND still have a life on the side to actually do things… Leave that aside then and just accept it…

The story still has too many holes in it (Would the medical profession really lack that much attention? Would she have so few friends to care about her?) and a very obvious ending that becomes clear at about 70% down the book. I found myself then skipping ahead on many pages to finally reach some action again…The fact that Christine seems to want to hump every single male character that comes along doesn’t add to her likeability either.

But more than anything, it was the weak ending that was such an anticlimax to it all… This was coupled with a conversation that explains every single action that was taken through the entire story to just not leave any sort of doubts or unclear points to the reader. No, absolutely nothing! Everything, every aspect of the story had to be explained, so the reader wouldn’t even be tempted to think about it (no, fear not, no brains needed! Switch it off right there!) and fill the gaps in any sort of way.

Then somehow the very end tries to leave a tiny tinge of doubt of possibility that this is not just a sudden happy ending like a rabbit pulled out of a magician’s hat. But really at that point too much has been already clarified to even leave any doubt that this might not be a 100% happily ever after ending to the max…

Overall, I’d definitely not describe this book as “brilliant” or in any sort of way memorable. No, this won’t be in the archives of literary history but… it’s an easy no-brains tube/bus read to be finished and forgotten again rather quickly, sort of like the protagonist’s memory. Just don’t overthink it and it might just be entertaining enough. And should you still not be tempted, the probably even more brainless alternative will welcome you soon on the screen apparently with Nicole Kidman as Christine.

Goodnight #London 💗🇬🇧 It's been a long week... Thanks for the beautiful walk home! #nofilter
#London evenings
Post Christmas fat burn #run 🏃🏻‍♀️🔥 Finally a sunny day 😎 Proud to have done more than rolling down the hill! Countdown to #Düsseldorf Half-Marathon #MetroMarathon #Oberkassel #RheinUfer #RheinWiesen #NoFilter
Christmas 2019, so much joy and peace with my little boy 🤗🐕 Mostly really just sleeping together 💤 #shibalover #shiba #doglover #shibainu #shibamania #shibastagram #shibalove #dogsofinstagram #shibasofinstagram #shibadog #shibainuway #shibesiteoflife #doglife #dogstagram
Entering #Europe 🇪🇺💓 Coming home for Christmas: the fuzziest warmest feeling of anticipation in the world. 🤗 Countdown to Christmas in Düsseldorf 🎄💗 #Brexit
#NoFilter just love 🥰 my aunt says we have the same mouth and nose 😂 To the question "Where is home?", it's where you are. #WeekendVibes #ShibaLover #shiba #doglover #shibainu #shibamania #shibastagram #shibalove #dogsofinstagram